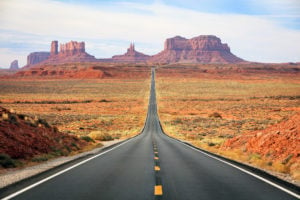 Utah is widely known for having some of the most scenic roads in the country. While most states dread road construction, Utahns actually boast about the topic in humorous lighting. All that being said, Utah still sees its fair share of fatal accidents. In fact, there were 128 traffic deaths in 2018 and 20% of those people were not wearing belts, according to the Utah Highway Patrol.

“Every crash death has a huge impact on our society,” says Colonel Michael Rapich, of the Utah Highway Patrol. While these accidents are often a result of human error, other times it is the sheer quality of a roadway that causes the crash. If you live in the Beehive State or are just traveling through, be mindful when driving on the following most dangerous roads in Utah.

Here are the Top 5 Most Dangerous Roads in Utah:

Starting at number one on our list of dangerous roads in Utah is the well-traversed Interstate 15. Running north to south through most of the state, I-15 passes through many of Utah’s most heavily populated regions, including Ogden, Salt Lake City, Provo, all the way down to St. George. Anyone who has traveled this highway knows I-15 is a traffic hot spot for trouble. Here are the highest risk factors for an accident on this roadway.

Interstate 15 has seen thousands of accidents in the last few years, and while Utah cities continue to grow, this highway is not getting any bigger…at least not for now. If you frequently use I-15 or plan to travel through Utah, remember to drive with caution on this route and be mindful of other drivers around you.

Highway 6 has not only made it onto our list of most dangerous roads in Utah, but according to NPR, this route is also one of the riskiest rural drives in the country. Since 1996, there have been more than 150 accident deaths as well as a gruesome 500 serious accidents on just that middle portion of the highway. From Spanish Fork down to Price, this 60-mile stretch of roadway snakes through canyons on a tight and twisting route. Here are the risk factors you’ll want to keep in mind when traveling on Route 6.

Unfortunately, Highway 6 is not the best route to pass slow-moving vehicles on. Many fatal accidents occur on this roadway because drivers end up crossing into oncoming traffic. If you travel along the Wasatch Mountains on Route 6, drive safely and watch for oncoming traffic.

Interstate 70 ranks 3rd on our list of dangerous roads in Utah for having a scenic yet perilous route. Known as one of the main interstate routes connecting the east coast to the west (almost), the portion of I-70 in Utah is one of the few roadways that doesn’t actually pass through any major cities. Nevertheless, this highway presents imminent danger to those unfamiliar with driving on desolate roadway systems. The following risk factors will help any driver see the true peril of Interstate 70.

Due to its long stretches of nothingness and steep climbs up to mesmerizing canyon views, it’s no surprise that this highway has made it onto our list. All drivers should be prepared when traveling this route, especially for the 100 miles between Green River and Salina.

The dangers of Washington Boulevard have been on the Utah Department of Transportation’s radar for quite some. A roadway that has seen at least one car accident a week since 2015, this busy route has a history of devastation for motorists and pedestrians alike. Passing through North Ogden’s rapidly-growing business district, if you’re a local commuter consider the following risk factors.

Ogden residents have even asked UDOT to install a crosswalk and light at 650 North on the boulevard to prevent further injuries. Sadly, some traffic is near impossible to avoid, but if you drive down Washington Boulevard often, keep a safe distance between cars ahead of you and make sure you can see oncoming traffic before making a left-hand turn.

Interstate 80 differs from I-70 in that it actually runs from east to west and traverses the entire United States. This route begins in downtown San Fransisco, California and travels all the way up to Teaneck, New Jersey. In fact, it is one of the original highways constructed in 1956. Unfortunately though, I-80 ranks third in Utah for having the highest traffic fatalities in the state. Like other roadways on our list, I-80, too, has a higher speed limit. Navigating this area has caused some deadly accidents in the past. Here are the following risk factors to driving on I-80 through Utah.

In the beginning of 2018, UDOT crews installed signs to help drivers know where to stop in case of an emergency. They also installed stretches of fencing to stop tragic accidents with migrating species in the future. If you’re on a cross-country road trip or simply taking a drive on I-80, watch out for nasty road conditions and other speeding drivers.

The sad reality is that some accidents happen in the blink of an eye. Which is why understanding what roadways are dangerous to travel on may help you in the long run. Should you or a loved one find yourself injured in an accident, we are here to help you. Our role as Advocates is to make sure you get the recovery you deserve, while we take care of the rest.

The Advocates will work with you each step of the way and get you the compensation you are owed. Reach out to our office today at 801-326-0809 for an initial consultation about your case. Or you can speak to an attorney right here on our Live Chat. Don’t wait. Call The Advocates today!